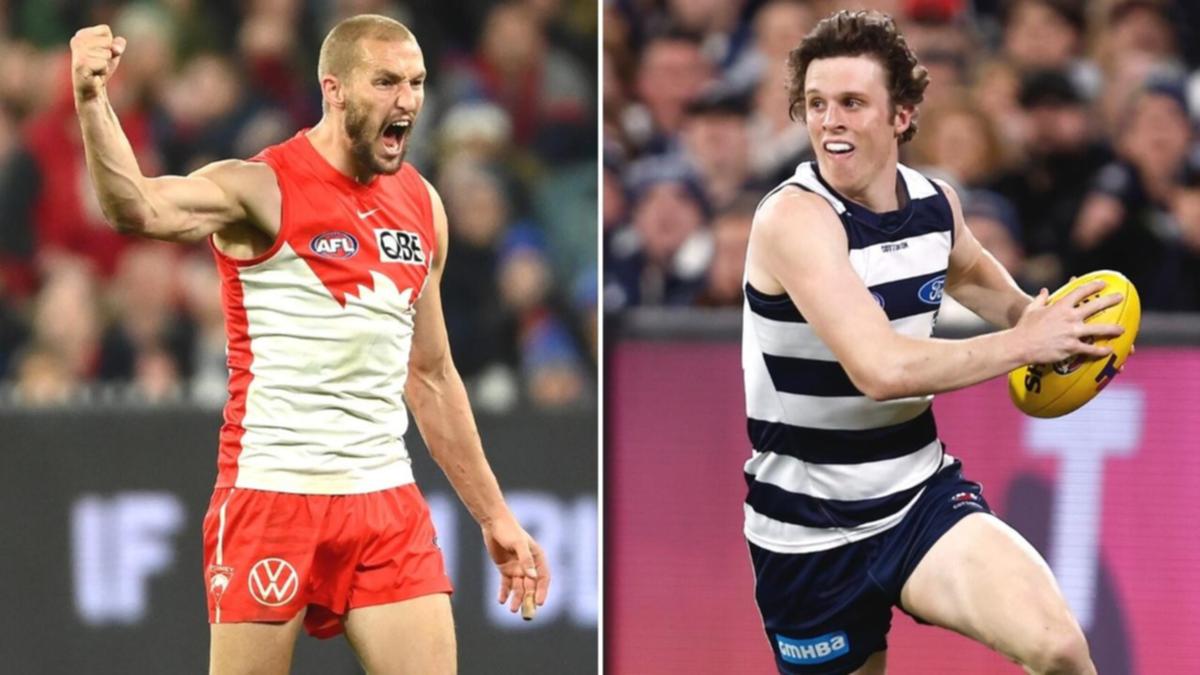 Young Sydney key forward Logan McDonald has joined the most unenviable group in football after being left out of the Swans’ side to face Geelong in this weekend’s AFL grand final.

The No.4 pick from the 2020 national draft has played 17 games this year, including the past five in a row – all five of which were wins – and kicked 15 goals.

WATCH THE VIDEO ABOVE: Mitch Cleary with the latest on Sam Reid.

And while all eyes were on Sam Reid, who suffered an adductor injury in last week’s preliminary final thriller against Collingwood, it’s McDonald that John Longmire and his coaching staff have made the brutal call on.

McDonald becomes the latest in a long list of names to be dropped for a grand final, which also includes Geelong ruckman Mark Blake (2007), Geelong defender Brenton Sanderson (1995), Collingwood full back Ron McKeown (1990) and, most famously, Essendon livewire, Derek Kickett (1993).

Kickett had played 23 games that season, including all three finals, but was cut from Kevin Sheedy’s side with Mark Harvey, Mark Thompson and Dean Wallis coming back in.

McDonald might yet get a reprieve, though, if Reid is a late omission. The 30-year-old key forward has been named to play, but didn’t train with the main group during Thursday’s match simulation and is still racing the clock to be fit for the big dance.

If Reid does come out of the 22, McDonald would seem the logical replacement.

Hayden McLean is the lucky Swan to replace McDonald, despite not having played at AFL level since round eight.

McLean played the first eight games of the season, kicking 10 goals, but hasn’t been seen since. He has edged out Joel Amartey for the spot, who was also vying for an unlikely call up to the side.

Justin McInerney has also been named for the Swans and moved freely at training on Thursday despite foot soreness which threatened to sideline the 22-year-old.

For minor premiers Geelong, Max Holmes has been named and seems increasingly likely to take his place in the side after recovering from a hamstring injury sustained last week, which wasn’t as bad as first thought.

Holmes was at long odds to be fit for the game when he was taken off in the Cats’ thumping win over Brisbane last week, but looks to have proved his fitness and will play in the decider.

Chris Scott’s notoriously prolific late changes have become almost a feature of Geelong’s game days in recent years though, so don’t be surprised to see the Cats make a late call.

Mark O’Connor, Sam Menegola and Brandan Parfitt are all waiting in the wings if Scott does decide to throw a spanner in the works.