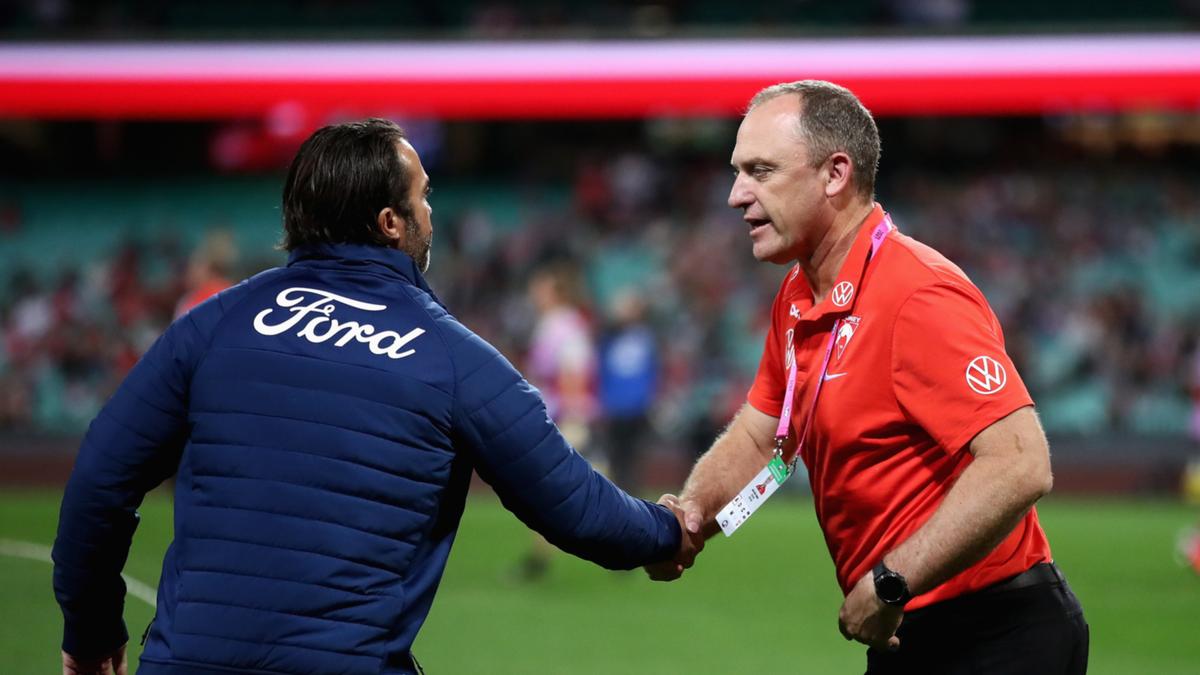 For the first time in their illustrious coaching careers, Chris Scott and John Longmire will face off against each other in an AFL grand final and – no matter the outcome – one of them will walk away with their name etched in history and a second premiership cup under their belt.

Both Scott and Longmire started their coaching careers in a blaze of glory. Scott, incredibly, managed to get his hands on AFL silverware in the first year he took on the senior coaching position at Geelong back in 2011.

In the same year, Longmire grabbed the Sydney coaching reins from Paul Roos.

Yes, Scott immediately struck gold, but it only took Longmire two years to join the premiership party when the Swans defeated Hawthorn in the thrilling 2012 grand final.

Longmire and his Swans would go on to play in two more grand finals in 2014 and 2016 without tasting success.

It took the Cats until 2020 to appear in their next decider under Scott, despite an incredible run of top-eight finishes.

Scott has a ridiculous 72.87 per cent winning record in home and away seasons, the best of any AFL/VFL coach with over 100 games to his name.

However, prior to this September, his record in finals slumped to 40 per cent (it has since improved to 44.44 per cent on the back of his past two finals victories).

He has missed finals once during his tenure and that was in 2015 when the Cats finished 10th.

Longmire’s home and away record is also impressive at 64.09 per cent, and he edges Scott in finals with a 52.17 per cent winning record. And like Scott, Longmire has a knack of getting his team into the finals.

However, in 2019 and 2020 the Swans decided upon a hard reset and started what some regarded as a controversial rebuild. Sydney drifted down the ladder. Some long-term favourites were cleaned out. They injected youth, life and a dash of dare into their famous Bloods culture, and a new course was set.

So impressive are the Sydney youngsters that six of them were named in the AFLPA’s 22Under22 squad (the most of any club).

Geelong, on the other hand, has been shrewd at the recruiting table and brought in seasoned warriors to help keep it in the finals mix. Hawthorn’s Isaac Smith and Jonathon Ceglar, Greater Western Sydney’s Jeremy Cameron, North Melbourne’s Shaun Higgins, Sydney’s Gary Rohan, Western Bulldogs’ Luke Dahlhaus, St Kilda’s Rhys Stanley and Adelaide’s Patrick Dangerfield are just some of the names arriving at Kardinia Park in recent years.

In fact, over the past few weeks they have been playing the oldest 22 in VFL/AFL history with the preliminary final team having an average age of 28 years and 173 days.

There is no doubt rival clubs look on with envy at the way Geelong continues to navigate its way through every single AFL season to keep itself around the mark when the whips are cracking.

And there is no doubt the AFL world is scratching its collective head in disbelief at the speed of Sydney’s rebuild to once again put itself in flag contention.

On Saturday, that tally moves to 11.

So, as we look ahead to what should be a fascinating grand final, we’re asking you THIS simple question: Who would you rather be, Chris Scott or John Longmire?