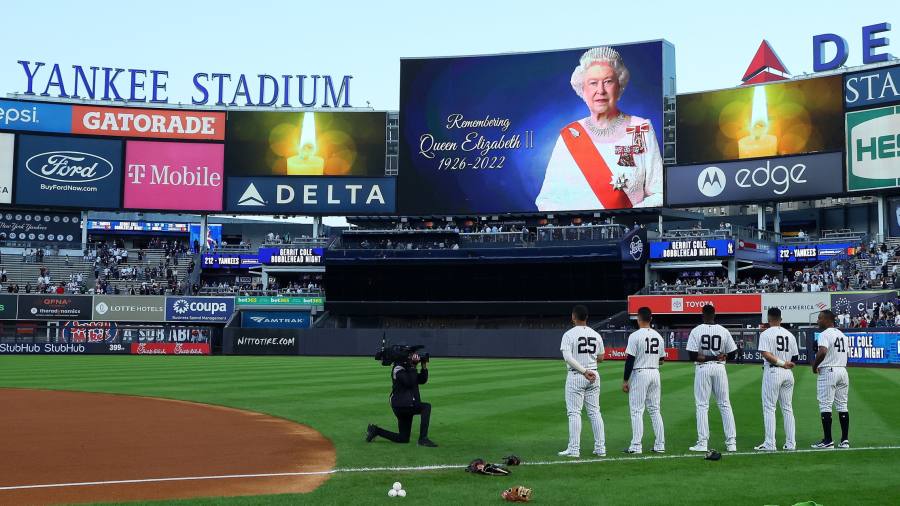 From the halls of Congress to the floor of the New York Stock Exchange and centre court at the US Open — and many lesser stages — Americans have plunged into mourning for a British monarch whose family’s rule they shrugged off with some consequence 246 years ago.

The reaction to the death of Queen Elizabeth II, aged 96, was sufficiently powerful to prompt a rare outbreak of bipartisanship in Washington, where Republican senator Mitch McConnell led lawmakers from both parties in prayer.

It brought an unusual hush to Wall Street, where traders at the New York Stock Exchange bowed their heads for a moment of silence just after 3pm. So, too, did spectators before the US Open women’s semi-final tennis match that evening.

At President Joe Biden’s order, flags at all US government facilities will be flown at half-mast until the Queen is interred. Hot on the heels of Biden’s proclamation, his predecessor, Donald Trump, issued his own statement expressing his and his wife’s sorrow. “What a grand and beautiful lady she was — there was nobody like her!” the Trumps wrote.

Tributes also poured in from former presidents Obama, Bush and Carter — as well as town mayors, state elected officials, British expats and ordinary Americans. Big and small, prominent and obscure, they all attested to America’s enduring fondness for Britain and the matriarch of its Hanoverian monarchy.

“She gave a lifetime of service,” said Dan O’Brien, who was visiting Washington, DC, from his home in Portland, Oregon, explaining why he joined a steady stream of visitors paying their respects outside the British embassy, where bunches of flowers were piling up. “Americans just don’t understand that concept.”

Also on hand was Tess Anderson, a student at Georgetown University, who recalled her mother waking her at 4am to watch Prince William marry Kate Middleton. “I really like that sense of tradition,” said Anderson, who was raised in Miami but whose grandparents are British.

For a nation created in opposition to monarchy — whose founding credo is that all men are created equal — Americans have time and again proven themselves besotted by the royal family. Consider the enormous viewing figures for the televised royal weddings, from Charles and Diana to Harry and Meghan, as well as the popularity of Netflix drama The Crown and Downton Abbey.

Roy Forey, a retired British diplomat, said he had been taken aback by the strength of feeling for the royal family when he first arrived in Washington in 1982. “I was here in 1997 when Princess Diana died,” he said. “At that time you couldn’t even walk on this street, it was so full of flowers.”

In 2015, President Obama expressed a similar sentiment to his guest, Prince Charles, as the Washington press swarmed. “I think it’s fair to say that the American people are quite fond of the royal family,” Obama whispered. “They like them much better than they like their own politicians.”

There is a periodic burst of punditry seeking to explain just why. In 2013, Maya Jasanoff, a Harvard professor, speculated in a New York Times forum that America’s obsession with the royal family “may point to an enduring insecurity about some of the things we lost” — hallowed traditions that bind a nation and confer legitimacy. Others argue in less lofty terms that the royals are the ultimate thousand-year soap opera and reality television show.

Whatever the case, this particular Queen was inextricably bound to America. She may never have assumed the crown if the American divorcee, Wallis Simpson, had not caused her uncle, King Edward VIII, to abdicate in 1936 in order to marry her.

She visited America several times, as princess and then as Queen, meeting presidents from Eisenhower to Biden. She rode horses with Ronald Reagan in 1982, during the Falklands war, when Britain was determined to solidify its alliance with America.

She charmed the Trumps in 2018, when Britain was again feeling unsteady about its place in the world — this time due to Brexit — even as thousands of demonstrators mobbed central London to heckle the American president (Trump repaid her courtesy by walking ahead of her — a breach of protocol).

When she and Philip came to Philadelphia aboard the Royal Yacht Britannia in July 1976 to celebrate America’s bicentennial, she won over the locals by suggesting in a speech that Britain should feel “sincere gratitude” for the lessons that America’s founding fathers had taught them.

Later, she visited Trinity Church in Manhattan for a ceremonial settling of debts from the revolutionary era (America’s back rent came to 279 peppercorns).

She has also appeared in sombre moments, paying her respects at Ground Zero, where 67 Britons were killed.

“A tear came to my eye when I first heard the news,” said Scott Robertson, owner of The Churchill, a British-themed pub in Manhattan, where the phones began ringing off the hook soon after the news of the Queen’s passing was announced.

People wanted to talk and share experiences, Robertson, a Brit who has lived in America for 25 years, said of the crowd. Around The Churchill, television screens were tuned to news coverage of the event. At one point a large table of Brits silenced the pub with a rendition of the anthem Jerusalem, until, at the mention of Prince Charles, they broke into the schoolroom hymn He’s Got the Whole World In His Hands.

For Americans such as Charlotte Clymer, a writer in Washington, DC, loving the royals, and the late queen, is less complicated.

“I would feel differently if I were one of the tens of millions of people around the world who were victims of violent colonialism,” Clymer said. “But the Queen is different.”

“Besides,” added Clymer. “It’s really just a big show for Americans. We get to observe all the drama with none of the payment.”