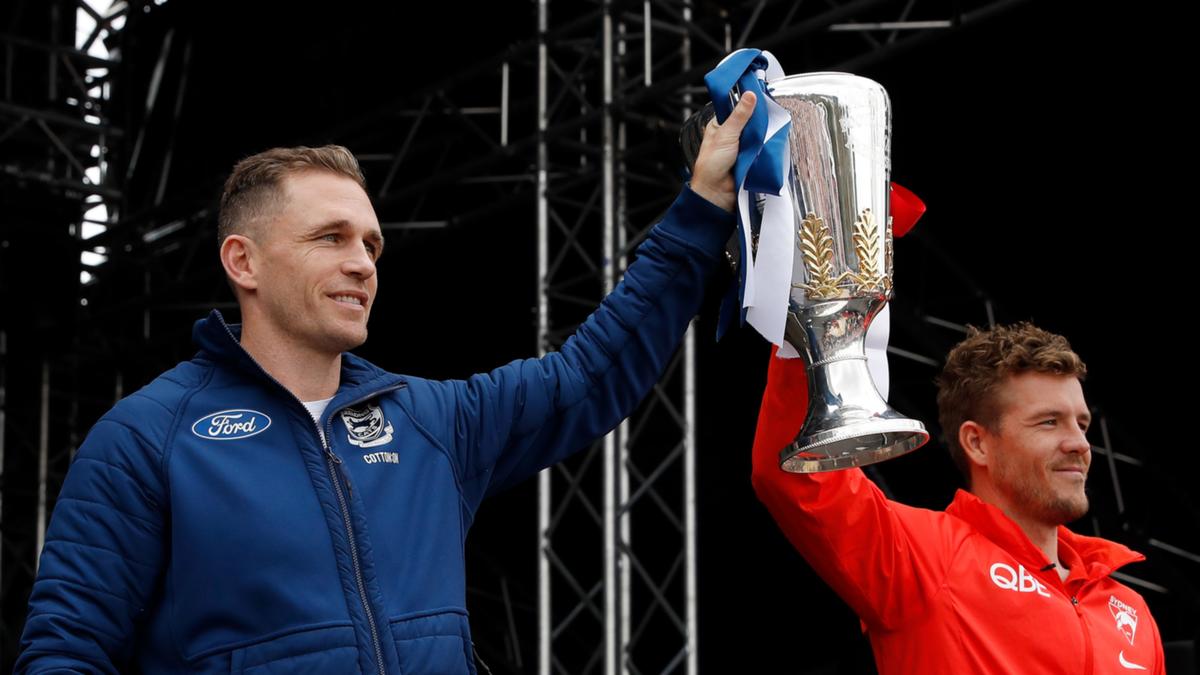 Soon the MCG will be full to the very brim. And soon the roar from within will reverberate around the inner-suburbs of Melbourne. And soon the Geelong Cats or the Sydney Swans – who have nothing but reverential respect for each other – will be crowned the AFL premiers for season 2022.

During the 21st century, the Cats and the Swans have been a beacon for football organisations across the country, a role model for all clubs to follow. But not only that, a former Geelong captain once revealed his club aimed to emulate Sydney by consistently playing in finals, and, unsurprisingly, Sydney have dipped into Geelong’s IP and now have a former Cats premiership captain as their CEO.

These two clubs are rich in history, both foundation members of the AFL/VFL, with Geelong one of the oldest sporting clubs in the world, and Sydney boasting an incredible tale of survival after they were dislodged from their base in South Melbourne at the start of the 1980s to become the central piece of the VFL’s plan to become a national competition.

Incredibly, over the years, the Swans and the Cats have danced around each other during finals time, indeed, stalked each other, but have never stepped into the ring together for that final game of the year. Geelong won the 2011 decider against Collingwood, Sydney scraped in against Hawthorn in 2012, Sydney lost by a point to West Coast in 2006, Geelong thrashed Port Adelaide in 2007.

In the 90s, they would again miss each other by a year, the Cats playing in the 1995 grand final and the Swans in 1996. And wind back the clock to the 1930s and it was the same again; Swans in 1936, Geelong in 1937, but never staring each other in the eye for that piece of glorious silverware.

Fast forward to today, and there are fascinating narratives everywhere.

Will Patrick Dangerfield, who famously walked on Adelaide to join Geelong at the end of 2015, get his hands on his first AFL premiership medal? Will Lance Franklin, who even more famously walked on Hawthorn to take up a monster $10 million, nine-year deal at Sydney, become a Swans flag hero in his final year of that mega-contract and add to his rich premiership history from his time as a Hawk?

This grand final will also provide us with a fascinating end to a Cinderella story. And it seems quite unbelievable that both clubs have the opportunity to fill in the final, blank page of a fairytale return.

Geelong picked up small forward Tyson Stengle this year who had been delisted from the Crows after a series of misdemeanours and spent a year in the SANFL. His return to the AFL has been nothing short of stunning, becoming an All-Australian player and booting 49 goals (thus far). A premiership medal to a player who was essentially unwanted will be one helluva ending to this redemption song.

But not to be outdone, Sydney added former No.1 draft pick Paddy McCartin to their list at the beginning of the season as a rookie.

McCartin had prematurely retired from the game following a series of concussions but he was desperate to return and ended up playing for the Swans reserves team as he plotted a way to join his younger brother, Tom, at the Swans.

Paddy becomes openly emotional when discussing his comeback to AFL level and sharing the experience with his brother. While many thought the Swans’ decision to hand McCartin a lifeline was controversial, no one can doubt what this journey means to him … and Tom.

And again, a premiership medal here will come with a few tears in a fairytale full of courage and brotherly love.

There is also Gary Rohan, the former Swan who now, as a Cat, is busy flipping his finals fizzer narrative on its head.

And let’s not forget our amazing coaches, Chris Scott and John Longmire, who started their coaching careers in the same year and pocketed flags in quick succession; Scott in his first season in the hot seat in 2011, ‘Horse’ in 2012.

There’s only been heartache since as they continue their push for a second cup … and today a bit more pain is about to smack one of them again. Grand finals are hard to win. This is a lesson both men know too well.

Scott is taking the oldest team in history (on average age) into this grand final. Most experts doubted he would get there at the start of the season. And, after a hard reset a few years ago, Longmire goes into battle with his Baby Bloods. Needless to say, this outcome did not feature in too many crystal balls at the beginning of 2022.

So here we are, with all those pages and stories unclear and unfinished. But, one thing can be certain, these two teams, with their famous cultures, are about to put on an actioned-packed classic.

Time to buy your popcorn.