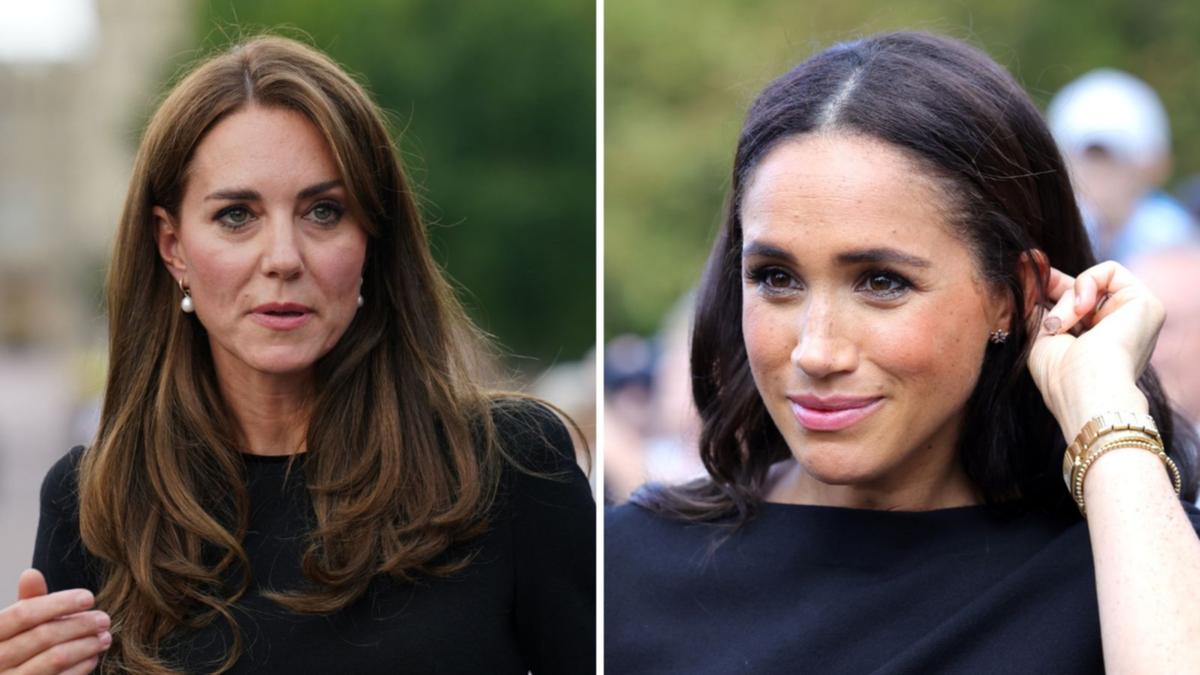 A UK TV host has claimed Kate, the Princess of Wales was “hopping furious” that Meghan, the Duchess of Sussex and Prince Harry were invited to join Prince William and herself on a walkabout to see crowds mourning the death of Queen Elizabeth II.

Talk TV presenter Julia Hartley-Brewer was interviewing Royal commentator and biographer Angela Levin when she discussed footage of the “fab four” reuniting to view tributes outside Windsor Castle on September 10.

WATCH THE VIDEO ABOVE: TV presenter says Princess of Wales was ‘hopping furious’

“Everyone I know watching those scenes (was) going, ‘Hello, look at the body language’,” Hartley-Brewer told the expert.

“Although with William and Harry there was some physical contact, Meghan looked frankly terrified and very nervous but Kate was walking completely separately.

“There was no exchange in 45 minutes between her and Meghan outside Windsor.

“It’s absolutely clear to me that Kate was hopping furious about being forced to walk alongside these two. Didn’t look to me like a rapprochement at all.”

Levin replied: “Well, I completely agree with you.”

“I wondered why Meghan was quite so twitchy. She kept her eye on what Prince William was doing… and then copied him, which looked most extraordinary.

“I don’t necessarily think Catherine was boiling with anger. I think she was just thinking, ‘If you think I’m going to talk to you or even look at you, you’ve made a mistake there’.”

Hartley-Brewer went on to say the Princess of Wales kept herself at “one or two metres distance” from William and Harry even as they stood closer.

Eagle-eyed viewers have pored over footage of the brothers and their wives in recent days, with one moment drawing particular interest.

It came when the two couples were about to go back to their cars after the Windsor walkabout.

An unsmiling Kate Middleton appeared to stare intently at Meghan Markle before noticing a camera in front of her, breaking into a smile and waving.

That brief exchange – or non-exchange – expressed a thousand unspoken words, according to some social media commentators.

One Twitter user even described Middleton’s seemingly cold stare as “a little scary”.

“A little scary how quickly Kate transitions from icily staring down Meghan to smiling and waving to the crowd,” they wrote.

“And notice that Harry has got one hand on her the whole time.

“He knows she isn’t safe and he’s going to protect her, thank God.”

“Did Meghan step back? Those few seconds look truly alarming,” another wrote.

“She did, and it was truly heartbreaking,” one Twitter user responded.

“That exchange was creepy,” said another.

“If looks could kill!”

Prince Harry kept a protective arm around or near his wife for much of the time, clearly aware that at least in some sections of the crowd she was not a welcome presence.

So divisive is Prince Harry’s wife that some critics even seemed to have a problem with the fact that she wanted to hold on to a bouquet of flowers given to her by a well-wisher.

But support for Markle on Twitter showed that the vitriol levelled at her in recent weeks and months is not universal.

“Breaking: The British media have explained they’re extremely angry at Meghan Markle for turning up. They have also confirmed they would’ve been absolutely disgusted if she’d stayed home,” one person noted.

“It is absolutely disgusting that the British press, media and public have given Meghan Markle a harder time than they’ve given Prince Andrew, who paid a financial settlement to the tune of 12 MILLION to end sexual assault allegations,” another fumed.

“Meghan has more class than any of them,” wrote another.

Prince Harry’s pain laid bare in chat to mourners: ‘It’s lonely without her’