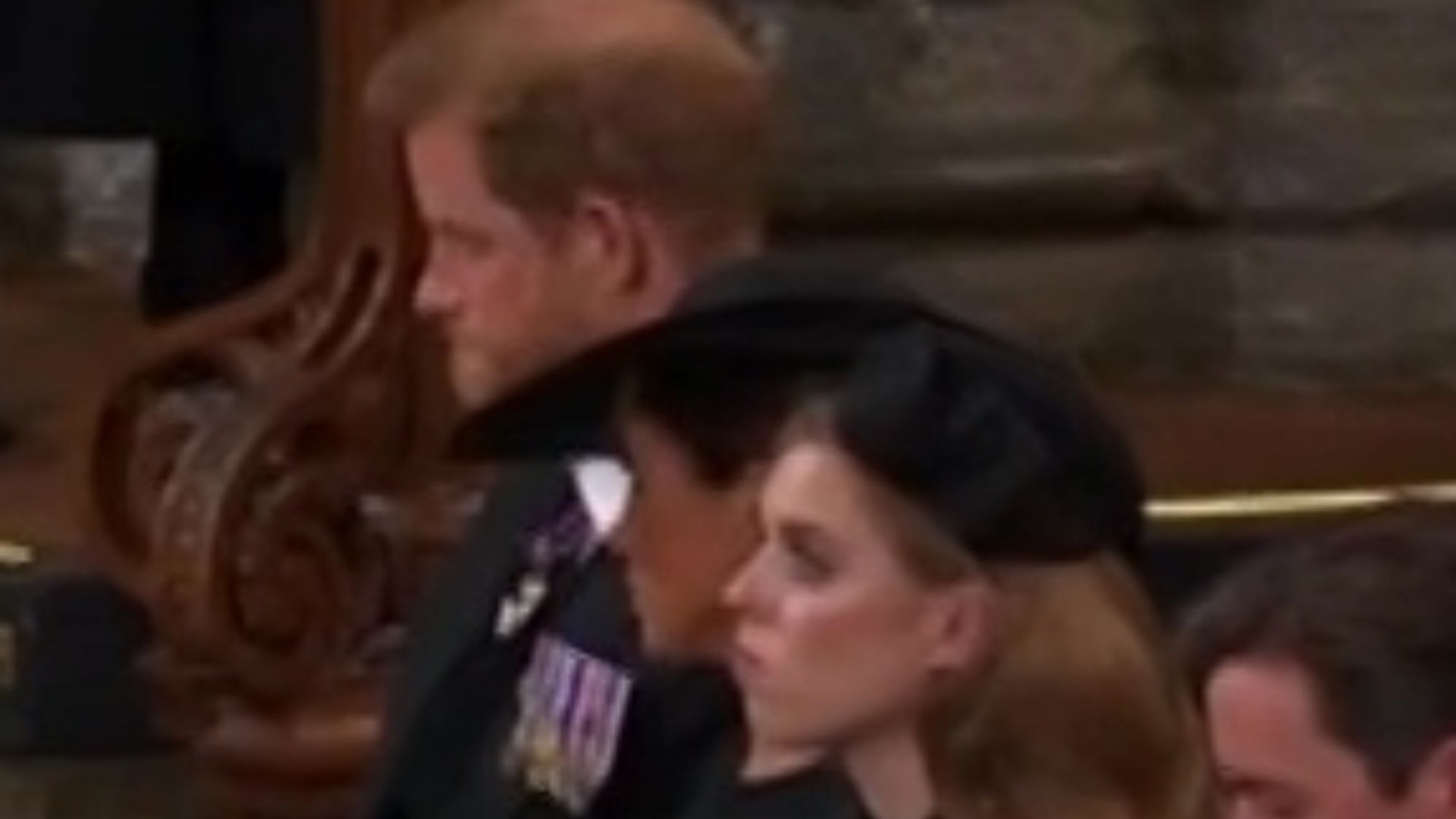 MEGHAN Markle and Prince Harry sat behind King Charles and Queen Consort Camilla in an emotional service for the Queen.

A sombre Duke and Duchess of Sussex were seen supporting the royals during the funeral service at Westminster Abbey.

Any differences with Prince William were put aside as Harry walked in with his brother.

The King and the Queen Consort sat in the ornate Canada Club chairs, with Camilla next to the Princess Royal, then Vice Admiral Sir Timothy Laurence, then the Duke of York and then the Earl and Countess of Wessex in the front row of the south lantern.

Across the aisle were the Prince of Wales, the Princess of Wales, Prince George and Princess Charlotte, and then Peter Phillips and Zara and Mike Tindall.

Directly behind the King was the Duke of Sussex with the Duchess of Sussex behind Camilla.

Meghan was sat next to Princess Beatrice.

US President Joe Biden was 14 rows back on the south transept behind the Polish leader and in front of the Czech Republic.

In the front of the south transept were the Realms governors general and then commonwealth counties followed by other nations including the US.

King Charles had previously offered an olive branch to Harry by allowing him to wear military uniform for the vigil for Harry’s grandmother, the Queen, at Westminster Hall.

There was speculation Harry, who served two tours of Afghanistan, would be blocked from wearing a military uniform for the vigil as he is no longer a senior royal.

But The Sun confirmed he has been granted special permission for the period of reflection.

The ruling was not a U-turn but a “one-off” decision by the King as a mark of respect for the late monarch.

Her Majesty was given a state funeral today to mark her incredible 70 years of service.

Previously,  Princes Harry and William were stood side-by-side as they followed the late monarch from Buckingham Palace to Westminster Hall in a haunting echo of their mother Diana’s funeral in 1997.

Following the service, a procession will be led by more than 200 musicians as members of the military line the route.

Royals will follow the gun carriage carrying Her Majesty’s coffin with Wills and Harry putting on another united front in the sombre march.

It contrasts to the cortege at Prince Philip‘s funeral last year when Harry and William were separated by cousin Peter Phillips.