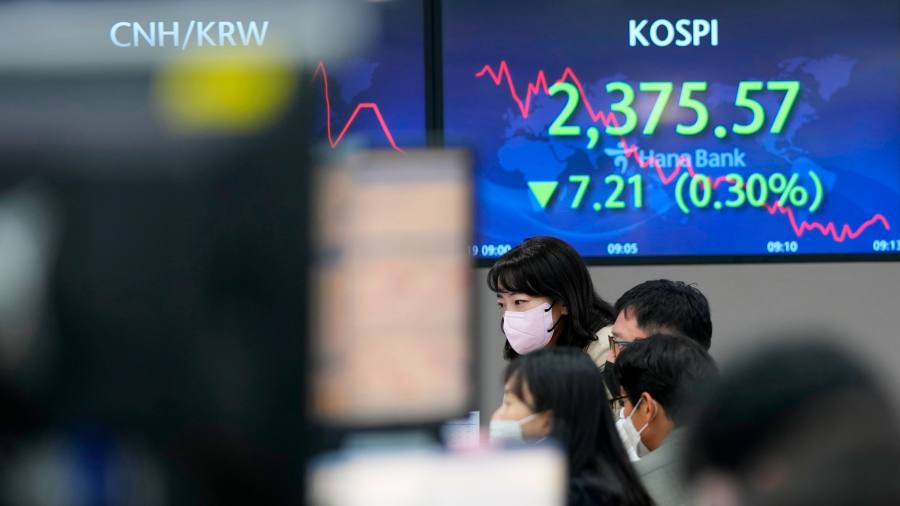 The US dollar renewed its rise on Monday and stocks fell as investors looked ahead to a spree of crucial central bank interest rate decisions that are expected to deliver additional monetary policy tightening by the Federal Reserve and Bank of England.

The dollar rose 0.3 per cent against a basket of other currencies, extending a powerful surge in recent months that has been fuelled by rising US interest rates.

Expectations of a further rate increase when the Fed meets later this week dragged global equities lower. Ahead of the start of trading on Wall Street, futures tracking the broad S&P 500 index pointed almost 1 per cent lower, while Europe’s regionwide Stoxx 600 slipped 0.8 per cent.

The gloomy performance on Monday comes after MSCI’s broad index of developed and emerging market stocks shed 4 per cent last week in its biggest weekly fall since June. Concerns about the health of the global economy and the spectre of further big rate rises from major central banks have spooked investors.

“This feels like a make or break week. There is the residual anxiety of the repricing we went through last week and there is no sense at all that the sentiment is turning for something better,” said Samy Chaar, chief economist at Lombard Odier.

The surging dollar hit sterling, which weakened to under $1.14.

“The currency market is probably summarising best how close we are to some kind of breaking point,” said Chaar. “The big question will be whether we will get some positive signal from central banks about when their hiking cycle will peak . . . You don’t see many paths through which the Fed could be reassuring.”

The consensus expectation on Wall Street is that the Fed will boost interest rates by 0.75 percentage points at the end of its two-day meeting on Wednesday. Market forecasts for a third consecutive rise of that magnitude were bolstered last week by data showing US consumer price inflation cooled less than forecast in August.

Pricing based on federal funds futures suggests the Fed will boost its main interest rate to 4.4 per cent in the early months of 2023, from the current range of 2.25 to 2.5 per cent as policymakers attempt to cool inflation.

Fears are mounting among investors that the central bank’s efforts to subdue inflation with monetary tightening will pull the US economy into recession as debt servicing costs rise for companies and individual borrowers.

The yield on 10-year US government debt pushed above 3.5 per cent for the first time since 2011 as investors sold the bonds, another sign of worries about the economy.

In Europe gas prices dropped about 5 per cent, with a slowdown in economic activity expected to lead to weaker energy demand. Volumes of gas held in storage have also increased, bolstering hopes that energy rationing can be avoided over the winter after Russia drastically reduced its supplies of gas to the EU.

The Japanese yen slipped 0.3 per cent to ¥143 against the dollar after last week reaching a 24-year low before the government stepped up its verbal intervention aimed at soothing the country’s currency market.

The Bank of Japan is set to make its latest policy decision on Thursday. Most economists expect the BoJ to stick with its policy of holding 10-year bond yields near zero as it attempts to stoke more durable inflation in an economy that has gone through decades of tepid price growth.

The BoE is also set to announce its latest decision on interest rates on Thursday, with the consensus forecast among City of London analysts pointing to a 0.5 percentage point rise.

Asian stocks also declined, with an MSCI gauge of shares in the region falling about 0.5 per cent. Equity markets in the UK and Japan were closed for public holidays.